OXFORD, England--(BUSINESS WIRE)--MinIT, a rapid analysis and device control accessory for nanopore DNA sequencing, is now arriving with genomics researchers. Scientists will use it to run the MinION DNA/RNA sequencer, opening up high-throughput, real-time nanopore sequencing to more users in more locations.

MinIT is equipped with a state-of-the-art NVIDIA AGX system, to enable real-time, high-throughput data analysis. It is preconfigured with software for quick setup and easy operation of the MinION. The pocket sized MinIT is powered by mains or separately available battery packs, so that it can be used either in a lab environment or out in the field.

At such high levels of data generation, powerful processing power is required to achieve the real time data analysis uniquely offered by nanopore sequencing technology. The MinIT, based on NVIDIA, is as much as 7X faster than a typical CPU based laptop and can be operated using a tablet or mobile phone. It can also be used alongside a less powerful laptop/computer.

The MinIT has been tested by scientists in the field, looking at:

MinIT is compatible with MinION, and also Flongle – an adapter for MinION that allows rapid, lower cost, smaller tests. Nanopore users have indicated that the MinIT will be used alongside MinION or Flongle in a variety of scenarios including rapid characterisation of infectious disease samples, cancer research, environmental analyses and food testing.

MinIT also comes preconfigured with software to run nanopore sequencing experiments, removing the need for configuration of a laptop. The instrument software MinKNOW, and real-time analysis platform for nanopore data, EPI2ME, can both be run on MinIT. 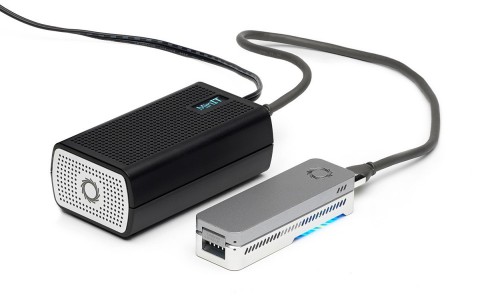